Chinese scientists created the worldâ€™s first liquid metal machine. This achievement was described by foreign media as creating a â€œterminatorâ€.

According to the website of the Institute of Physics and Chemistry of the Chinese Academy of Sciences, on March 3, a joint research group led by Prof. Jing Liu from the Institute of Physical and Chemical Technology of the Chinese Academy of Sciences and the School of Medicine of the Tsinghua University published a topic entitled â€œSelf-Fueled Biomimetic Liquid Metal Molluskâ€ in Advanced Materials. Research papers of 2015) were quickly reported by dozens of well-known scientific magazines or professional websites such as New Scientist, Nature research highlights, Science news, etc., which have caused important international repercussions and heated discussions.

For the first time in the world, this research has discovered an unusually unique phenomenon and mechanism, that is, liquid metal can move in a deformable machine shape for a long time after swallowing a small amount of material, and it can realize autonomous movement without external electric power. It lays the theoretical and technical foundation for intelligent motors, vascular robots, fluid pumping systems, flexible actuators, and even more complex liquid metal robots.

This liquid metal machine is completely free from the complex external power system, thus taking a crucial step towards the development of independent and independent flexible machines.

The article was selected as a front cover story in the journal. Altmetric econometrics data showed that its index reached 71.0, which was much higher than the journal average of 6.7. In the same period, it ranked No.1.

The study revealed that the yttrium-based liquid alloy placed in the electrolyte can provide energy by "taking in" aluminum as food or fuel, enabling high-speed, high-efficiency long-term operation. A small piece of aluminum can drive liquid metal balls with a diameter of about 5 mm. Achieve up to 1 hour of continuous exercise at speeds up to 5cm/s.

This kind of flexible machine can move in the free space, but also can walk in various structural channels. Surprisingly, it can also be self-deformed and adjusted with the width of the channel along the way. When it encounters a turn, it is paused. It seems that after concluding with a little thought, the process continues as if the Terminator robot appeared in a science fiction movie. general.

It should be said that a series of unusual habits of liquid metal machines is already quite close to some simple natural molluscs in nature, such as: can "eat" food (fuel), autonomous movement, deformable, have a certain metabolic function (chemical reaction), so The authors named it liquid metal molluscs.

The invention of this artificial machine also led to the question of "how to define life."

At present, the laboratory has been able to produce liquid metal machines of different sizes based on the above principles, ranging from tens of micrometers to several centimeters, and can move in different electrolyte environments such as alkaline, acidic or even neutral solutions.

Experimental and theoretical analysis shows that the power mechanism of this autonomous liquid metal machine comes from two aspects: First, the Galvanic battery effect between the liquid alloy, metal fuel and electrolyte forms an endogenous electric field, which induces a high liquid metal surface. An asymmetric response to surface tension creates a powerful thrust in the easily deformable liquid metal machine. At the same time, the hydrogen produced during the above electrochemical reaction also increases the thrust.

It is this dual role that generates the extraordinary behavior of liquid metal motors. This energy conversion mechanism is also of great significance for the development of special forms of energy and power systems. 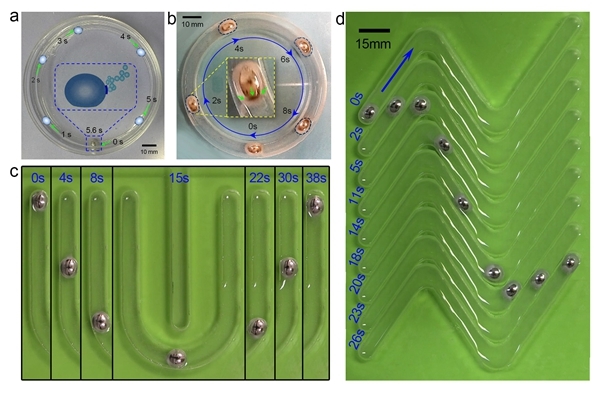 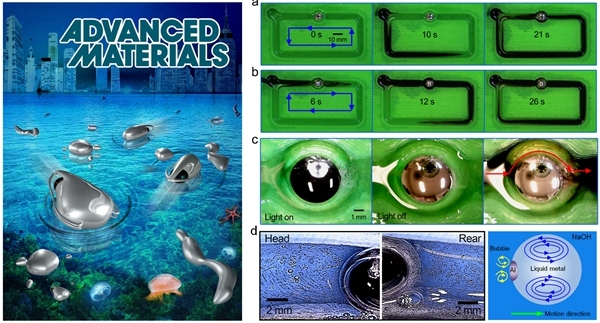 Among the various flexible machines developed so far, the deformability, operating speed, and life level of the autonomous liquid metal machines are relatively rare, which adds many important uses.

As one of the specific application devices, the paper also specifically demonstrated the first liquid metal pump that does not require external power. By confining it to the valve seat, it can achieve the purpose of self-rotation and pumping fluids. According to this, a large number of micro can be quickly manufactured. Pumps, such as liquids and arrays of microfluidics, are extremely cost-effective; if such flexible pumps are used for cooling, highly integrated microchip coolers can be realized; further applications can develop blood vessels or Tunnel robots are even self-assembled liquid metal smart machines.

The publication of the articles on the above-mentioned first-time discoveries was published online. Within a short period of time, it attracted the attention of many scientific journals, professional websites, and news media all over the world. New Scientist reported for the first time in an article and an elaborate video: â€œLiquid metal brings shape-shifting robot a step closerâ€ and points out that â€œit will become an artificial life in future films.â€ "Such liquid robots will be a seed of artificial life seen in some movies"; Nature reports in its research highlights "Liquid metal motor moves by itself"; Science The website publishes observation articles and videos: "Shape-shifting metal motor has a variety of uses"; Reuters also made special reports on this.

There are numerous scientific journals or professional websites that report on this work. Physicists organize a website: â€œShape shifting liquid metal able to propel itself through liquidsâ€; Chemical and Engineering News C&EN: "Rolling Out Liquid-Metal Motors"; Uncover California: "World's First Liquid Metal Robot"; Siliconrepublic: "The first Terminator type liquid motor was introduced. "First Terminator-1000-like liquid motor developed with unlimited potential"; Mirror mirror: "Real-life-t-1000-liquid-metal-motor"; Popular Science : "Terminator-Like 'Smart Liquid Metal' May Be The First Step In A New Arms Race" by the Terminator's Intelligent Liquid Metals; Space Daily et al: "Liquid Metal Robots Almost Here, and they are made by China (Liquid Metal Robots Are Almost Here and They Are Made in China); P Opular Mechanics: "The T-1000 Is Probably Made of This Liquid Metal That Moves Itself" may have been the site of the Terminator 1000 robot; more websites are looking forward to this groundbreaking technology. In the perspective of robotics, drug delivery, blood vessels, and environmental monitoring, it is considered "The Robotics Industry Is on the Verge of an Incredible Breakthrough" and "it is obviously a huge first step." â€œAugust a huge first stepâ€â€, â€œThis is a source of many potential commercial uses, and it has great potential for the industrial and government industries around the world.â€ (That's where the potential commercial uses come in, which should be of huge interest to industry and Governments around the world)". 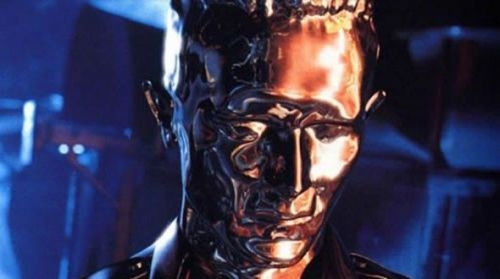 Everyone has seen "Terminator 2". The ability of the big villain T-1000 liquid metal robot to die hard is chilling.

According to preliminary statistics, hundreds of scientific or professional websites have been reviewed and republished about two weeks after the article was published, illustrating the impact of this study.

The advent of self-propelled liquid metal machines has led to a new concept of deformable machines, which will significantly accelerate the development of flexible smart machines. At present, the world's R&D activities around advanced robots are in an all-out phase. If we can bring into play the enormous potential of liquid metals and combine related technologies, we will bring about many changes beyond the traditional machine.

The Liu Jing group's discovery of the self-driving effect of liquid metal and the corresponding machine form has opened up a whole new approach for the development of advanced flexible intelligent robot technology. It has very important scientific significance and practical application value.